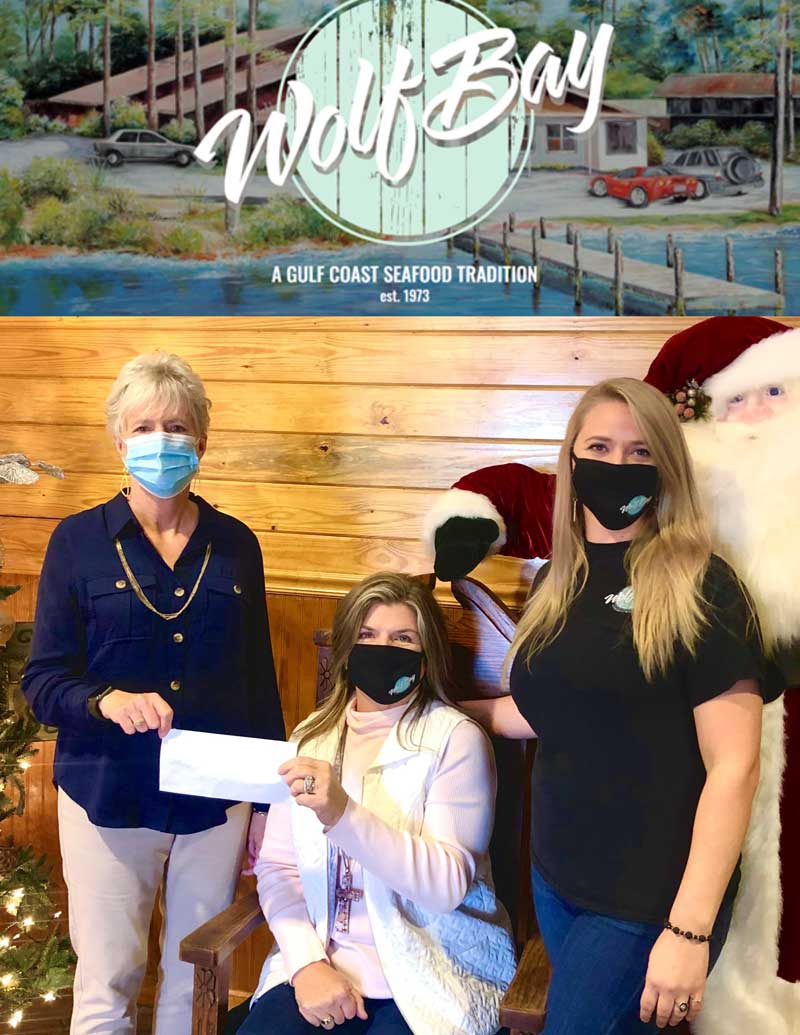 January 15th, 2020 (Foley, Alabama) – Wolf Bay owner and alumna of St. Benedict Catholic School, Char Haber, presented her alma mater with a check for $15,991.58 following a series of fundraising events held in the school’s honor throughout the Fall of 2020. “We wanted to do something that could help with St. Benedict’s gym recovery efforts following Hurricane Sally and to celebrate their 100th year anniversary of being such a valuable part of this community. ” stated Char. She continued, “Our original goal of $12,000 was to cover the insurance deductible but thanks to the overwhelming support of so many we were able to surpass that amount by $4,000.”

The Wolf Bay fundraisers consisted of spirit nights, a yard sale, and bake sales featuring kiefels- a homemade German pastry with a very rich heritage among St. Benedict families and the surrounding Elberta community. “Each year our mothers and grandmothers would gather to make kiefels for the St. Benedict German Festival. I have so many wonderful memories when I think back to those times of my childhood. It was absolutely wonderful being able to recreate these memories alongside Mrs. Marie Kaiser and so many incredible volunteers, which included SBCS families, faculty, and alumni. I even got to share this tradition alongside my daughter just as my mother and I did. There’s no doubt in my mind that mom was looking down smiling,” said Char.
“The support and love from Char, the Wolf Bay family, and the community has been incredible. St. Benedict can now look forward to a new year with a new roof on the gymnasium, and we are so excited!” said Dr. Kathy McCool, Principal of SBCS.
St. Benedict Catholic School is a fully accredited private school founded in 1921 and continues to serve students in South Baldwin county grades PreK3 through 8th grade. They are committed to building a community of inquisitive minds, faithful souls, and giving hearts in a safe and loving environment. St. Benedict was recently voted Best Preschool and Private School in Baldwin County*. They offer affordable tuition options and are currently enrolling for all grades. The public is invited to attend their upcoming Open Houses being held January 23rd 10am-noon and January 31st 1pm-3pm at their campus located at 12786 Illinois Street, Elberta, AL 36530. Additional information can be found at www.saintbenedict.net or by calling 251-986-8143.
*(Best of Baldwin 2021 - Gulf Coast Media)
####
About Wolf Bay Restaurant: Wolf Bay is a family-owned Gulf Coast tradition known for its fresh seafood recipes, hand carved steaks, and local ambience. Its rich history began in 1973 along the shores of Wolf Bay in the Miflin-Elberta community. They now have two Alabama locations in Foley and Orange Beach. To learn more about Wolf Bay please visit www.wolfbaylodge.com.
More Current Happenings
Recent Posts